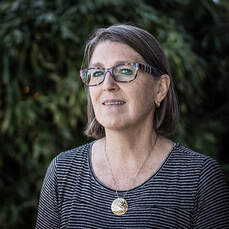 Aldyen Donnelly - Nori
​Director of Carbon Economics
Aldyen Donnelly has been a small business developer and consultant for over 40 years. In the mid-1990s, Aldyen started to work on market-driven strategies to reduce atmospheric carbon concentrations. Having gathered together an "emission reduction credit" or "ERC" buyers group, Aldyen developed and executed the world's first major forward ERC purchase agreement to finance carbon sequestration in agricultural soils, as well as the first ERC sales-financed carbon capture and storage project. 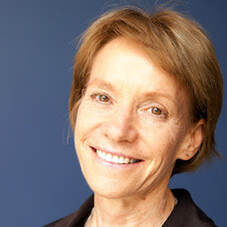 Beverley Henry - Queensland University of Technology
Adjunct Associate Professor
Dr Beverley Henry is an Adjunct Associate Professor at Queensland University of Technology, Australia, a member of the Scientific and Technical Committee of the 4 per 1000 Initiative, and a consultant working with agricultural industries and government on climate change mitigation and adaptation, agriculture, land use and sustainability issues. She is a member of several Australian and international committees including as a member of the Australian Emissions Reduction Assurance Committee and as co-chair in 2019 of the Global Research Alliance Integrative Research Group, and regularly contributes to advisory groups and panels in several countries. 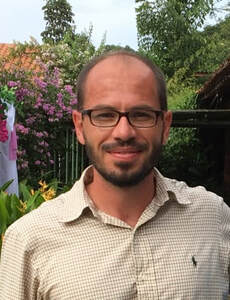 Ciniro Costa Junior - CGIAR Research Program on Climate Change, Agriculture and Food Security (CCAFS)
Science Officer
​Ciniro Costa Junior received a doctoral degree in Sciences from the University of São Paulo (Brazil/2014) and worked as Research Scholar at the University of New Hampshire (USA/2013) and as Postdoc Fellow at The Woods Hole Research Center (USA/2014-2015).
He is currently Science Officer of the CGIAR CCAFS and Project Coordinator at IMAFLORA, a socio-environmental Brazilian NGO, with expertise on mitigation solutions for the agricultural sector, managing large GHG emissions and soil C stocks databases and providing analysis of feasibility for carbon markets and public policies.
Among others, he is a Team Member of the SEEG project, Roster of Experts of UNEP-Climate and Clean Air Coalition, a MIT Climate CoLab Impact Assessment Fellow, and Member of the Brazilian Government Committee responsible for setting up a monitoring system for tracking the progress of low carbon agriculture in Brazil. 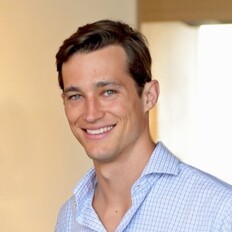 Dan Harburg - Indigo
Director
Dan Harburg is a scientist and entrepreneur working at the intersection of agriculture, robotics, electronics, materials, chemistry and biology to develop disruptive technologies. He is an engineer and a physicist by schooling and deeply enjoys using his problem-solving skills to generate meaningful solutions for the world's greatest needs. He can read patents, build spreadsheets, and write code or go deep with art critics or Spanish chefs. He fundamentally believes that success in startups comes from building teams of multi-lingual experts who share a common language of human-centered design and never stop questioning their assumptions. 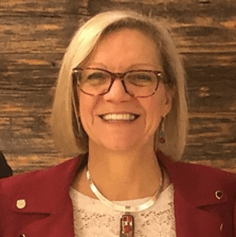 Debbie Reed - Ecosystem Services Market Consortium (ESMC)
​Executive Director
​Debbie Reed was named Executive Director of the ESMC in May of 2019 upon the establishment of the Consortium and subsequently assumed the same role for the ESMRC upon the creation of the Research Consortium in November of 2019. Reed’s role in leading the ESMC builds on decades of experience in agriculture climate change mitigation and sustainability efforts at the national and international level. Previously, Reed led the Coalition on Agricultural Greenhouse Gases (C-AGG), a national multi-stakeholder coalition, supporting the development of tools, support systems, knowledge, and programs to improve quantification of GHG from agriculture. Prior to her work with C-AGG, Reed worked at the White House Council on Environmental Quality as the Director of Legislative Affairs and Agricultural Policy and in the U.S. Senate as a Senior Staff on natural resource and agricultural issues for U.S. Senator Robert Kerrey of Nebraska. She has held numerous leadership positions at the U.S. Department of Agriculture, including special assistant to the Deputy Under Secretary for Research, Education and Economics (REE) and special assistant to the Administrator of the Agricultural Research Service (ARS). 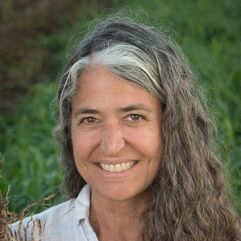 Deborah Bossio - The Nature Conservancy (TNC)
​Lead Soil Scientist
Deborah Bossio is the Lead Scientist for Soil Science and Food Systems at The Nature Conservancy.  She is an integral member of the Global Science team, and an active member of the Cabinet of Lead Scientists.  She brings soil science expertise and partnerships to advance climate, agriculture, and conservation priorities. Most recently she is leading efforts for the Conservancy to accelerate action on natural climate solutions, specifically regenerative agriculture to address climate, food and environment challenges.
Deborah came to TNC after spending more than 20 years living and working in Africa, Asia and the Americas working as a science leader in the CGIAR. In that capacity she was based in Kenya Ethiopia and Sri Lanka, and led research teams on sustainable soil management, food security, climate, and landscape approaches to sustaining ecosystems. Deborah’s academic roots are in Soil Biology. She holds a M.Sc. and PhD in Soil Science from the University of California, Davis and is passionate about the pivotal role that soils play in supporting lives and ecosystems. She has published a wealth of research papers on the subject and emphasizes bringing soil science to practice. 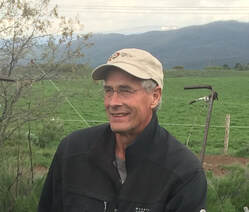 Keith Paustian - Colorado State University
University Distinguished Professor
Keith Paustian is University Distinguished Professor in the Department of Soil and Crop Sciences and Senior Research Scientist at the Natural Resource Ecology Laboratory at Colorado State University.  A major focus of his work involves modeling, field measurement and development of assessment tools for soil carbon sequestration and greenhouse gas (GHG) emissions from soils. He has published over 300 journal articles and book chapters. Previous and current research activities include development of models and inventory methodology used to estimate US soil C and N2O emissions that are reported annually by EPA to the UNFCCC; development of a web-based tool (COMET-FarmTM) for estimating on-farm GHG emissions and carbon sequestration used by USDA (http://cometfarm.com/) and project-scale systems for GHG assessment of sustainable land management projects in developing countries (http://www.carbonbenefitsproject.org/).  He served as Coordinating Lead Author for the IPCC 2006 National Greenhouse Gas Inventory Methods and IPCC 2003 Good Practice Guidance for Land Use, Land Use Change and Forestry (LULUCF), on two National Academy of Science committees (in 2010 and 2018) and numerous other national and international committees involving climate and carbon cycle research. 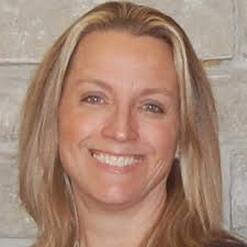 Pamela M. Bachman - The Climate Corporation, a subsidiary of Bayer
Digital Agriculture & Sustainability Lead
Dr. Bachman has had a varied career that has led her from non-profits to academia and the private sector.  In that time, she has kept one key theme, wise use of our natural resources is necessary for a sustainable future.  Trained as an ecotoxicologist and ecologist, Bachman has gained an international reputation in regards to the ecological impacts and risks of conventional and biotechnology-derived crop protection products.  Dr. Bachman’s belief has been that partnerships across sectors are necessary to achieve outcomes related to ecological conservation, restoration, and sustainability. She has worked to find common ground across private sector, academia, NGOs, and government on issues related to pollinator conservation and biodiversity.  At The Climate Corporation, Bachman is building a new program to use data science and develop digital tools to aid the agricultural community in adopting more sustainable practices aimed towards reducing the environmental impacts of farming including greenhouse gas emissions. Dr. Bachman is the recipient of a 2020 Outstanding St. Louis Scientists Awards from the Academy of Science – St. Louis. 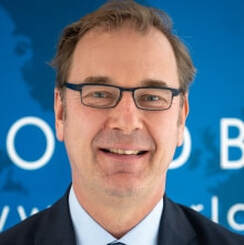 Martien van Nieuwkoop - The World Bank
Global Director, Agriculture and Food Global Practice
As Global Director, Martien provides leadership to the formulation and implementation of the Bank’s strategy and knowledge in agriculture and food, oversees the operationalization of the Bank’s vision on agriculture and food in regional and country programs, acts as senior spokesperson for agriculture and food Bank-wide and globally and manages the Agriculture and Food Global Practice.  The Agriculture and Food Global Practice has a portfolio of about 160 projects with close to US$ 20 billion in commitments in investment project, program-for-results and development policy lending and about 250 staffs.
Before taking this position, Martien served for two years as Practice Director of the World Bank’s Agriculture Global Practice, where he oversaw the Bank’s agriculture lending, portfolio and analytic work in the East-Asia Pacific, Latin-America and the Caribbean and South Asia Regions, coordinated collaboration with IFC on agribusiness, and led the Bank’s global engagement on agriculture and climate change.
Martien joined the World Bank in 1993 as a Young Professional and worked initially as an agriculture economist in the Latin-America and Caribbean Region.  He was cluster leader covering agriculture during field assignments in Madagascar from 2001-2004 and in India from 2005-2007.  From 2007 to 2015 Martien worked as Program Coordinator and Sector Manager for Agriculture in various assignments in the Africa Region, including covering Southern and West-Africa.  He was also the Practice Manager for Agriculture in the South-Asia Region, a position he held from 2015-2017.  Prior to joining the Bank, Martien was an associate scientist in the Economics Program of the International Maize and Wheat Improvement Center in Mexico from 1991-1993 and an associate expert in the Dutch bilateral cooperation program in Pakistan from 1989-1991. 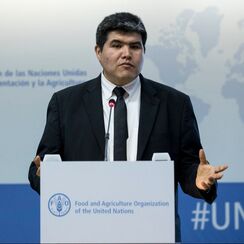 Ronald Vargas -  Food and Agriculture Organization of the United Nations (FAO)
Secretary Global Soil Partnership
Ronald is a soil scientist with over 15 years of working experience in natural resources management with a focus on sustainable soil management for food security and ecosystem services. He joined FAO in 2011 as a Land and Water Officer and is the Secretary of the Global Soil Partnership (GSP) since its establishment in 2012. He has supervised the implementation of the GSP, its regional soil partnerships and the institution of the Intergovernmental Technical Panel on Soils. He leads the technical and scientific cooperation within and among regions, coordinates and facilitates the establishment of joint actions between governments, research institutions and NGOs for the achievement of soil-related SDGs. He promoted the International Year of Soils, the revised World Soil Charter, the Status of the World’s Soil Resources Report, the Voluntary Guidelines for Sustainable Soil Management, the International Code of Conduct for the sustainable use and management of fertilizers and the preparation of audience-specific technical and communication material for the World Soil Day campaigns. 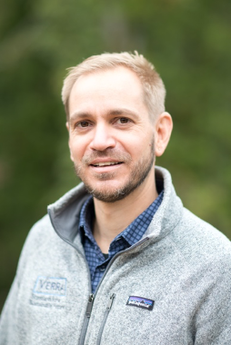 Stefan Jirka – Verra
Innovation Manager, Agriculture
Stefan works on Nature-Based Solutions at Verra, exploring opportunities to scale up regenerative agriculture within Verra’s programs. He previously supported development of Verra’s LandScale initiative.
Prior to joining Verra, Stefan worked at One Acre Fund promoting agricultural development among East Africa’s smallholders; at Cornell University researching the greenhouse gas benefits of large-scale sustainable land management projects in Ethiopia; at the International Biochar Initiative, an NGO promoting the use of biochar for soil carbon sequestration and agricultural enhancement; and at Blue Moon Fund, a private grantmaking foundation supporting environmental and social sustainability initiatives.
Stefan earned his MS in Environmental Sciences and BS in Biology, both from Cornell University. He conducted his master’s thesis research in Mato Grosso, Brazil, which piqued his interest in the nexus of globalization, rural development, food production and environmental conservation. 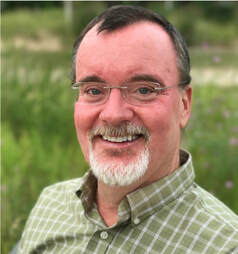 William Salas - Dagan
Co-Founder, Chief Executive Officer & Chief Strategy Officer
Bill brings more than 20 years’ experience in environmental science and business leadership to Dagan, along with a driving passion for soil health and sustainability. Bill has led research teams at the NASA Jet Propulsion Laboratory, the University of New Hampshire, and Applied Geosolutions, using his skills in remote sensing and biogeochemical modeling to deliver critical environmental information to stakeholders. He leads Dagan’s team with experience and a contagious optimism for the positive change to come.